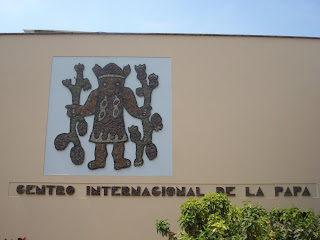 One of the big reasons for our my work trip to Peru was to visit CIP, the Centro Internacional de la Papa or International Potato Center. This is a member of the CGIAR network of research centers peppered throughout the world, each one dedicated to a suite of crops. There is CIMMYT for wheat and corn in Mexico, IITA for yams, black-eyed peas, and plantains in Nigeria, ICRISAT for millet, peanuts, and other dryland grains in India, etc. Logically CIP is located in Peru, one of the centers for potato origin and diversity (though the center's location in coastal Lima and not in the high-altitude potato regions seems to be a purely political consideration). 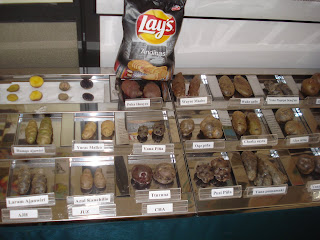 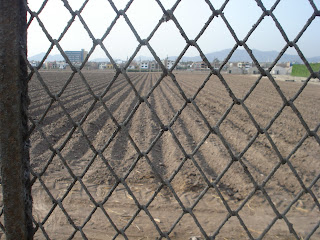 and in vitro seed bank (this latter is the largest of its kind in the world). 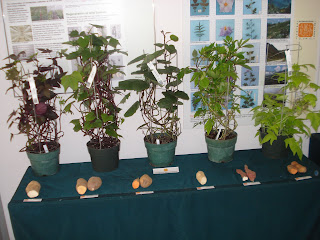 and the so-called Andean Roots and Tubers, many of which we are investigating in our Muisca Garden project. 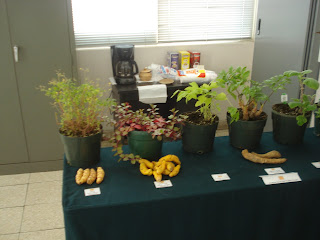 Above we have from left to right ibia or oca, ruba or ulluco, ahipa, arracacha, and yacon. 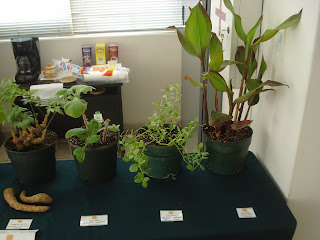 In this photo we have, from the left, arracacha, yacon, what I believe is mauka, and achira. CIP doesn't have on display two of the 9 Andean Tubers, cubio or mashua and maka.

Of the crops managed by CIP, our Huerta Muisca project is looking at ibia, ruba, cubio, arracacha, potato, and achira. Arracacha and achira are native to and widely grown in Colombia, and in fact they seem a bit neglected by CIP's programs, which focus mostly on yacon and maka. Yacon is a carrot-looking root in the sunflower family, which contains a weird starch-like nutrient called inulin. Inulin gives a sweet, filling flavor, but is not digestible by the human gut, so it has potential for processed diet foods. Maka, on the other hand, is a radish-like root that grows at very high altitudes, upwards of 4000 masl. It has potential as a stimulant and medicinal plant, which is why CIP is also looking into processed forms of it.

The other Andean Root and Tuber crops seem not to be as much of a priority for CIP. For instance, they have fewer than 70 accessions (like a variety) of achira in their seed bank, and these seem not to be kept clean and in conditions to send to other research institutes to work with. This means that Colombia's national collection of achira is about as large as CIP's, and I believe better-maintained. In some ways this is a boon for me, as it means that whatever work our team does on achira will be a real contribution to the field, and not just a drop in the bucket of existing research, as it would be if we were working on potato, for instance. 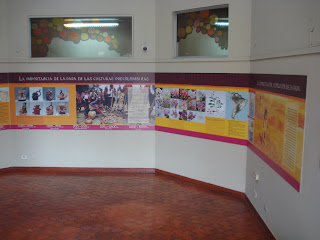 For visitors CIP has a small exhibit on the history and future of the potato in the world, in addition to the potted samples of their different crops.

Our visit consisted mainly in interviews with different curators of the potato seedbank (or germplasm collection, as it's also known). It was interesting to learn about some of the projects CIP is involved in. They are evaluating the collection of cubio to see which varieties have high levels of anti-cancer compounds. They have also worked on the marketing and industrial angle of their exotic native potato collection to see which native varieties might lend themselves to new uses as fresh supermarket produce or processed chips and starch.

It was very impressive to visit CIP and see the wide-reaching international implications of its work. However, for me it was also heartening to see our project's strengths vis a vis a big center like CIP. Essentially we're working on the ground, collecting information about local crop varieties and farming practices. This may not seem as official or large-scale as CIP's work, but in some ways it's more effective in terms of development impact, because we are seeing problems and possibilities in our area from up close. Furthermore, there is a need for both levels of intervention--the large germplasm bank and research center that maintains genetic resources and lays the groundwork for applied agricultural development, and the smaller, grassroots effort that puts cutting-edge and traditional knowledge to work in a particular local context. We would see a great example of the synergy between CIP and local grassroots groups in our visit to the Parque de la Papa in a few days, which was the original inspiration for our entire trip.
Posted by chicagron at 6:01 PM