Adventure in Peru 4; the National Museum of Archeology

One of the highlights of our trip to Peru was a visit to the National Archeology Museum in Lima. We focused especially on food and agriculture, as per the theme of our project. There is no exhibit in the museum dedicated exclusively to food, but many of the cultures highlighted have fascinating representations of food and crops.

We got a personal tour from the museum's director, who happens to be passionate about studying archeological food and farming. It was great bouncing ideas around with him during the tour.

We started with cave art. 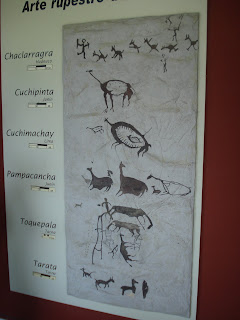 Very different from our rock paintings in Colombia, though of course the photo here is from pre-agricultural hunter-gatherers, not settled agricultural peoples as in the case of Boyaca, Colombia. At any rate, these cave paintings remind me of cave paintings from hunter gatherers in Europe, Africa, and Australia.

The first big event for me was seeing the famous Tello obelisk. This is a carved column from the Chavin culture depicting animals and mythical creatures, and most importantly for me, some crop plants. Lathrap, quoted by Piperno and Pearsall, postulated that this column represents the hot, lowland tropical roots of this culture that flourished in the high Peruvian mountains during the millennium before Christ. Toward the bottom of the picture below is a grotesque head with leaves sprouting from the top. It has been theorized that this represents monocot root and tuber crops like malanga (Xanthosoma sagittifolium), achira (Canna indica), and arrowroot (Maranta arundinaceae). 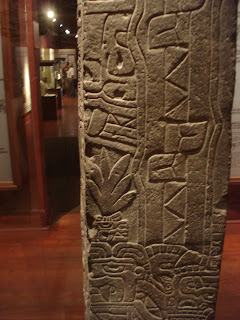 By the same token the next angle shows a knobby bush growing from an underground head. This would represent manioc, a dicot root crop. 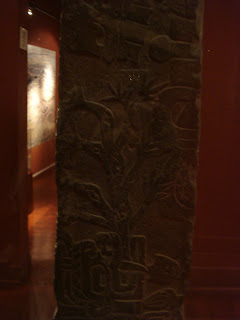 There are also depictions on the obelisk of peanut, gourds, and peppers, but I didn't get good photos of those.


This next photo is from the Mochica culture that flourished on the northern coast of Peru shortly after the time of Christ. They have great depictions of crops that are still eaten today. 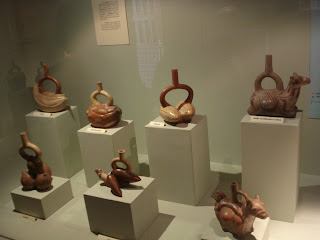 In the above photo we have stuffing cucumber (Cyclanthera pedata), sweet potato (Ipomea batata), sweet nightshade melon (Solanum muricatum), and cassava (Manihot esculentum), in addition to some llamas and some fruits at the lower left that I can't identify.

This is unmistakeably an achira rhizome. 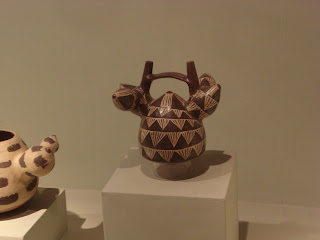 In the foreground of the next photo is lucuma, a fruit I never tried in Peru, and to the left is a cornstalk! 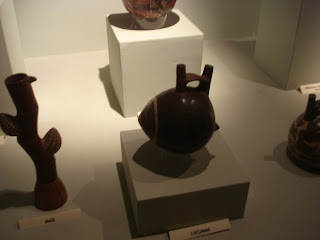 These have nothing to do with farming or food, but they show the amazingly detailed human depictions of the Moche. 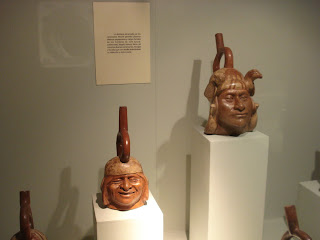 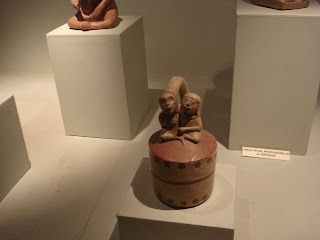 And a llama or deer mother with its baby. 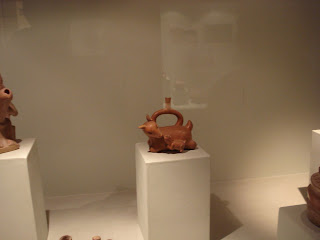 Below is a vase from the Wari culture, I believe. They were in power in coastal and inland Peru during the later part of the first millennium after Christ. I'm not sure what the yellow plant depicted in the foreground of this photo is. Perhaps stuffing cucumber (Cyclanthera pedata) or peppers of some sort (Capsicum spp.). 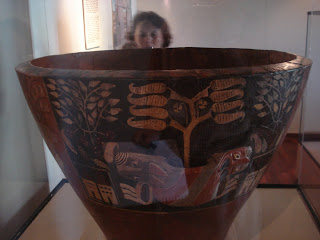 Here is another angle of the same urn. The plant shown here is either potato (Solanum spp.) or ruba (Ullucus tuberosus), and below it are a few stray tubers of other species. 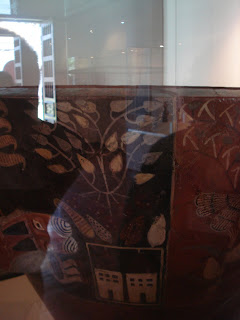 Another urn from the same period shows more plants. At the upper-left-hand corner is cubio (Tropaeolum tuberosum), unmistakeable for the shape of its leaves and tubers. At the right is something that looks like corn with a bunch of ears, but I assume it's pepper or something. At the lower left the plant might be corn (Zea mays) or achira (Canna indica). It's not very clear or accurately depicted if it's one of those. 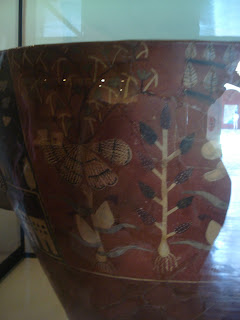 I don't know what the hell the next plant is. Cassava? Peppers? 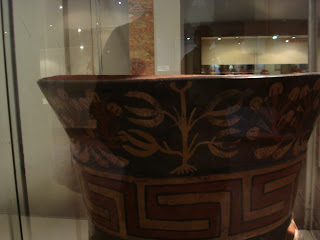 Below, from the Lambayeque or Sican culture that followed the Mochica and the Wari on the northern coast, here are depictions of stuffing cucumber, achira, gourd (Lagenaria siceraria), guamo (Inga edulis), and a guinea pig (Cavia porcellus)! 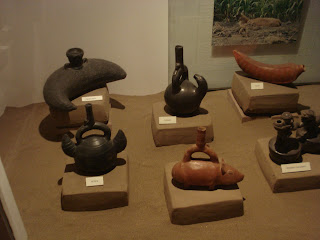 I believe also from this culture are the following depictions of corn and guamo. 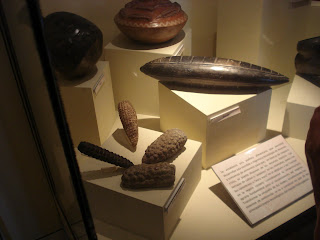 And this cornucopia with potato, corn, sweet potato, and perhaps some type of squash. 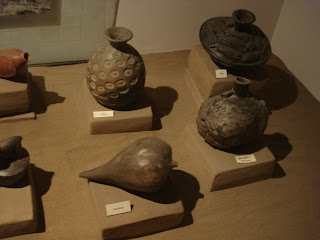 Here are some Inca-era tools. These were ostensibly for prying rocks while mining, though I wonder if they also served for agricultural purposes. 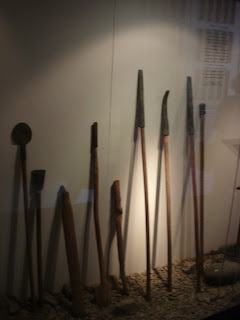 I believe the following cloth, showing what seem to be peppers, corn, fish, and a bunch of other things, is also from the Inca era. 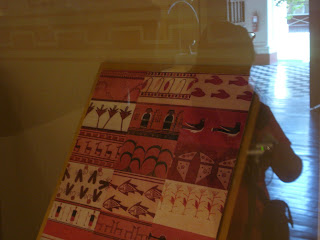 Our visit ended at the Museum's repository for organic materials. Much of the volume of the pieces in the refrigerated, humidity-controlled chamber consists in pieces of wood from different excavation sites. Here are a few impressive oars. 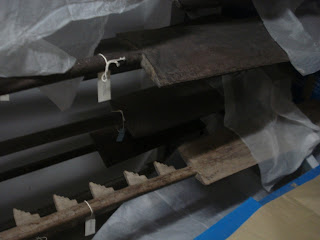 But the largest number of items pertains to vegetable remains from different excavations around Peru. 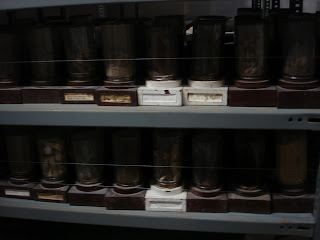 The Museum is the official reception point for anything dug up in archeological expeditions. Unlike in humid Colombia, Peru's dry climate allows for the intact preservation of organic remains from thousands of years ago. Many of these jars were excavated almost a century ago, as evidenced by their old-style glass packaging. They've been entrusted to the Museum ever since. There are so many that the staff haven't yet even identified or classified them all. There are lots of peanuts, and also many soil samples that might hold interesting information about ancient cultures.

Here is a mislabeled achira, probably dug up in the 1930s and put in an old jar that had contained another type of root crop. In Colombia you'd never find such a well-preserved, whole specimen of a fleshy tuber crop. The best we can hope for are microscopic remains that tell us that a plant lay in a particular place and decomposed long ago. 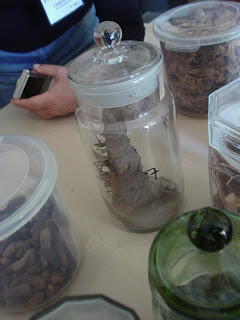 In the central patio that the museum staff would like to turn into a living garden, much like our Huerta Muisca, there are lots of non-indigenous plants. Among them this fig tree supposedly planted by Simon Bolivar himself! 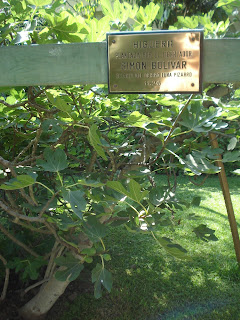 Strolling about in the garden was a nice postlude to our visit. Here we were in modern Lima, in a house used by the Great Liberator, converted into a museum showcasing Peru's ancient heritage. I felt so privileged to partake of it, as I often feel in my work with the archeological past.
Posted by chicagron at 6:14 PM