A recent treat in the Tenza valley was a youth dance festival in the town of Tenza itself. Young people from all over Colombia came and performed typical dances from their region, and a winner was declared at the end.


We arrived late, so we only caught the last three performances. There was a sanjuanera dance from the Tolima region of Colombia: 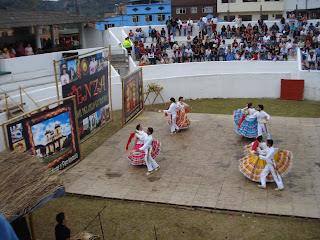 Then a group of Afro-descended kids from Bogota did their dance. 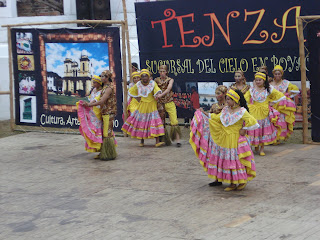 Seeing it live you can really detect the African influences.


The penultimate group I got photos of was from Meta, in the Eastern Plains region of Colombia. Their dance involved one kid dressed up like an alligator, and everyone else dancing about and scolding him. 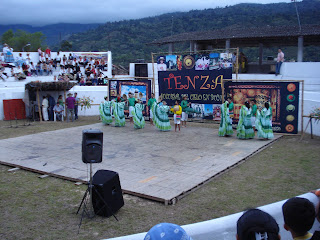 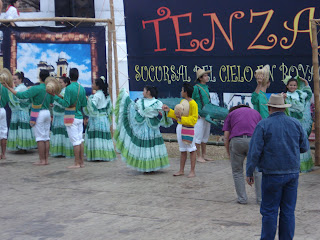 I kept laughing at the alligator. It was really a cool gimmick.

A group from Somondoco, in the Tenza Valley, arrived late. I believe they had been participating in the Guayata parade earlier that day, and barely made it to the dance festival. They danced carranga, typical of Boyaca.


After the dances ended, all the young performers got out onto the stage and intermingled while they waited for the judges' verdict on the best group. 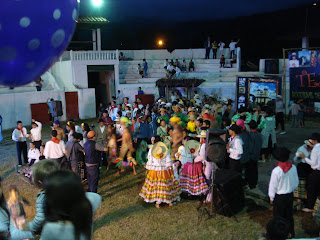 Earlier on, we had seen all the kids as they milled about backstage in between performances. 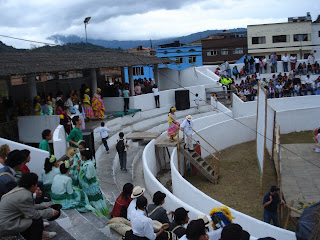 I imagine for most of them this dance festival was a big deal. Perhaps it was the first time for some of them to leave their home regions, or to meet kids from other regions. Of course the Tenza Valley and our state of Boyaca in general seem familiar to me, and not very exotic. But for a kid from the coast, or the plains, our tame little region would be a big adventure.


I especially liked seeing kids from different groups mingle and dance with each other at the end of everything. I wonder how many new friends were made over the few days of the festival. Perhaps even some summer romances. Here is a video of a bunch of the kids doing a conga line.

I was really happy to see a few guys from our reserved Boyaca region go out on a limb and make friends with kids from the more outgoing, boisterous coastal region, who surely must have felt a bit lost and awkward so far from home. I always feel a kinship with people from the coast that find themselves in our cool, inland region, trying to navigate and make friends in a place with a different culture and a different skin color. I felt this way for much of my growing up in Chicago, and nowadays I often feel like an outsider in my adopted hometown in the mountains of Colombian.
Posted by chicagron at 7:53 AM