During the next month I will be leading a series of 20 workshops with dairy farmers.  The theme of the workshops is promoting sustainability in dairy farms.  I started last week in the Nariño department of Colombia, in the extreme south of the country, near the Ecuador border.  My initial impressions of Nariño were shocking; I had long heard of Nariño as a green, fertile highland department, much like my home base of Boyacá.  But the approach to the airport looked like this: 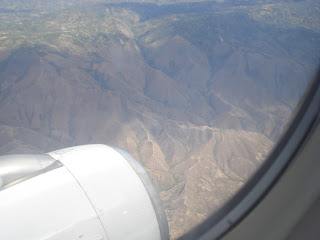 I later learned that the arid, eroded, denuded slopes I had seen belong to a lower altitude, semi-desert zone of Nariño, much like the Valle de Leyva in Boyacá.  Also like the Leyva valley, for some reason rich urbanites from Nariño like spending vacations in this dusty, warm region called Chachagüí.

The rest of my trip in Nariño consisted in landscapes that were closer to what I had expected.  Mosaics of plowed fields, green pastures, wooded fencelines. 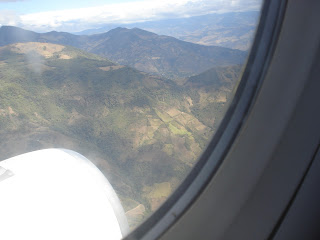 The people of Nariño are also similar to the boyacenses.  They are quiet, shy, with many indigenous cultural attributes, and very sharp and attentive.  While many of my workshops were dominated by some of the wealthier, larger dairy farmers in each zone, I felt that the rest of the audience was intently considering the themes we were discussing, mulling over them critically.

I gave workshops in Guachucal, Pupiales, and Pasto, all in Nariño.  I regret to say that I didn't do much sightseeing; I mainly gave my workshops, then collapsed exhausted in my hotel room, to eat, work some, and go to sleep.  I felt like a highly modified version of George Clooney in "Up in the Air".  One night I watched the movie musical of "Hairspray" in my room and nostalgically listened to Erykah Badu.  But I didn't get any photos of the places I visited.  I did, however, feel that I really got to know something of the structure and functioning of Colacteos, the dairy cooperative that was hosting me in the zone.  I am eager to learn more about cooperativism, and back in Bogotá I'll be looking for their delicious Papialpa cheese, which is a special cheese for roasting, a la Greek saganaki.

Now I'm in the Cauca Valley department, near Cali.  The weather is warmer, the terrain flat, and the dairy farms much bigger.  Today was my first workshop here, hosted by Cogancevalle, the local cattle rancher cooperative.  The people in this area are reputed to be more direct and talkative, and in many ways they are; we had a lot of avid participation during the workshop.  But for some reason I felt like I didn't get through to them as much with certain messages.  Maybe I'm accustomed by now to working with reserved indigenous peasants, and I don't know how to deal with other personality types.  Or maybe I was just a bit off my game today.  At any rate, tonight I'm staying in a hotel in Tuluá, and tomorrow I'll give another workshop here.  Let's hope it goes better than today did in Cartago.

True to form, I didn't do much sightseeing yesterday in Cartago.  I was so tired from my flight and long taxi trip that I just worked in my room and then ate dinner in the hotel.  I did notice on the ride in that Cartago has a lovely, dilapidated old colonial stone church.  Surely there's some interesting history behind it, but my Lonely Planet and Michelin tour guides that I'm toting on this trip don't even mention Cartago.  It made me think that it would be interesting to publish a more in-depth tourism guide for Colombia, something like "Colombia like a native".  For tour guides of Spain or France, small towns like Cartago would receive at least a mention, but for more exotic, Third-World destinations, often tour guides linger only on the big cities and sights.  I feel like Colombia is entering a place now though in which there are more and more tourists coming, and surely some will want to break off the beaten path.  Would there be a demand for a guidebook that talks about all the little neat corners of Colombia, like Mongua with its pre-Spanish statues, or La Capilla, Boyacá with its miraculous image of the Virgin Mary?

If such a guide existed, I'm not sure it would include Tuluá.  Tuluá is a nice, manicured little town, a tropical version of anytown, Europe. 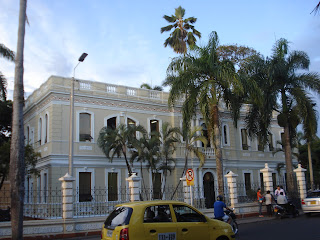 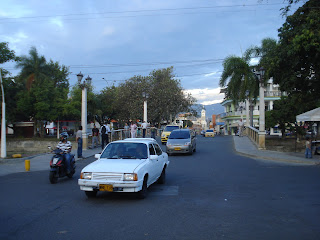 Nice plazas, with lots of people out and about socializing in public spaces. 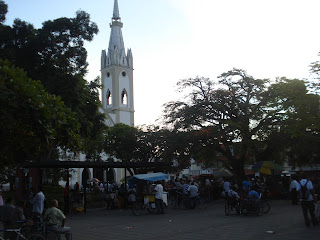 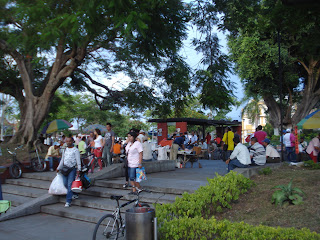 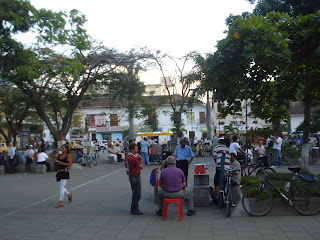 Lots of bike use.  Even a very snazzy public library set into a picturesque riverfront park. 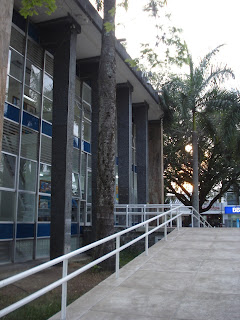 But not much to offer a tourist.  Or maybe so; maybe a glimpse of the comfortable tropical life people have carved out for themselves in the Cauca Valley would be interesting to travelers.  Even if not, I'm glad I finally got out and walked around in order to get to know these places I'm passing through.  Granted, spending a day with local dairy farmers is also a fascinating way to get to know part of the reality of a given place, but I hope to be better too about taking a stroll and seeing firsthand at least a small slice of each place my work takes me.
Posted by chicagron at 4:58 PM