Ode to my phone 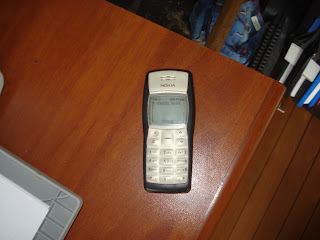 This is my cellular phone.  I've had it for a few years in Colombia, after my first two phones conked out quickly.  When I bought the current phone, it was already maybe third-hand.  I got it from a somewhat shady operator in a wholesale/contraband district of Bogotá.  The phone has served me very well, and has in fact outlasted a number of outer plastic replacement casings and various chargers.  Its only flaw is that the plug jack for charging the phone seems to have accumulated some gunk and rust that prevented easy charging.  This problem has been solved by a trip to a local phone repair stand, where a woman scrubbed out the jack with a toothbrush and some sort of solvent.  While I was waiting for her to finish, another customer with a higher-end but easily-broken phone complimented me on my humble device.  She said that my model of Nokia phone was the most rugged, functional phone out there.  In fact, I've heard that my model of phone is often victim to robberies here in Bogotá, because it has a relatively high resale value despite its old vintage.

I write all this because I think an important part of sustainable living is buying and using rugged, long-lasting electronic devices. This way you are neither generating lots of electronic landfill waste, nor are you contributing as much to the consumerist juggernaut that eats up natural resources and devours your hard-earned cash.  I don't have many electronics except for my phone and my laptop, but both have lasted for years.  This is not entirely thanks to product quality or personal virtue; in order to keep your electronics running for a long time, you also need a supporting cast of local craftsmen who are willing and able to repair the devices.  I am lucky enough to have such repair places in my town and in Bogotá.  For instance, I have fixed problems with my computer's keyboard, power supply, fans, etc., and have even upgraded from 1MB to 4MB of RAM.  I have heard and recall from personal experience that in many US towns it's hard to find someone who will fix and maintain your electrical and electronic devices.  If your society's imperative is compulsive consumption and waste, it's hard to be a good boy.
Posted by chicagron at 10:46 AM