Small victories at the farm

I have written about my father-in-law's farm in the past on this blog.  It is always a joy to go there, for the warmer climate, for the lush rural setting, and most of all because I can live out some of my agrarian fantasies starting silly little projects.  Usually these projects consist in my planting something, not being able to tend it very well in our infrequent visits, and eventually the plant's succumbing to the weedwhacker or the machete of a careless farmworker too busy doing real work to tiptoe around my caprices.  At times this gets me down, because I spend time and effort trying to get tree seedlings growing or whatever, only to have them die.

One of my earliest and most longstanding silly projects was planting a pineapple from the crown of a fruit we got from the nearby market.  I knew this breed of pineapple was not exactly suited to the farm's climate but rather to a warmer, drier zone, but I planted it anyway.  The plant grew and I guess you could say it prospered, but in three years it had never yielded fruit.  Normally pineapples give their first fruit in about a year and a half after planting, so I figured that this breed was simply too far out of its comfort zone.  It would grow leaves ad nauseum, but was destined never to flower.  Imagine my surprise when this last weekend I went to do my regular machete-weeding around the plant's base, only to find this: 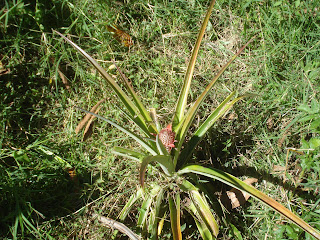 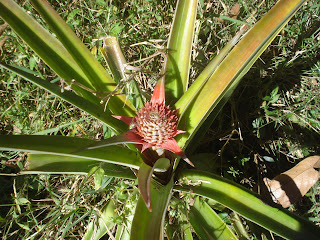 A pineapple's fruit is really many fruits fused together, each cell having arisen from an individual flower, which then closes to form one of the hexagonal scales on the pineapple skin.  This little bright pink thing is the beginning of such flowers and fruits.  It looks like we will have a pineapple, after all!

You can't imagine how thrilled this little pineapple made me.  I was buoyed, for once feeling that my farm projects were not entirely futile, and I not entirely incompetent as a grower.  All the dog-trampled gardens, all the sun-baked cotton seedlings, all the disease-affected avocadoes were counterweighted by my triumphant pineapple.

Reassured by this, I went with great fervor to dig postholes for a fence I'm building there.  My idea is to cordon off a steep hillside that doesn't really serve for any other productive use, and convert it over time into a flourishing agro-forest, with an understory of plantain, banana, and coffee, and a high canopy above of different fruit and timber trees.  But since the rest of the lot is flat and used for occasional horse and cattle grazing, I have to fence off my little edge of it, both in order to prevent the livestock from eating my seedlings, and to avoid their breaking a leg in one of my planting holes (which spend at least a month empty after digging, so as to let the soil decompress and the manure soak in before I put the coffee seedlings in).

I only got five postholes dug this time, and my body was really torn apart by the task of hauling each heavy wooden post about 100 yards up and down hills in order to place it in its corresponding hole.  But thanks to my pineapple victory, I was motivated and enthusiastic throughout the job.

That same weekend I learned that a good friend's ex-girlfriend had died.  I hadn't spoken to her in years, but you get to know a close friend's girlfriend practically as if she were your own girlfriend, especially if you've shared breakfasts with her in a ramshackle, semi-heated house during your college years.  I was happy that she had reached a sort of a pinnacle in her career before dying--that must have made it feel at least like she'd gotten to a fair place for a rest amidst life's constant climbing and chaos.  I thought of her the whole time I was building my fence, and I wondered what she'd think if she were there with me.  I don't think heavy physical labor in hot, wet tropical savanna would have been her thing, but I bet she would have liked to at least see the surroundings.  At any rate, when I got as far as I could for that weekend, I decided to dedicate my labors to her memory.  It isn't much for now, but eventually that fence will be long and sturdy, and enclose a beautiful forest oasis.  It will heretofore be called the Melissa fence.
Posted by chicagron at 3:19 PM