I am finally getting around to writing about my worm composting system.  I have long wanted to compost my household waste, and during years of independent urban living I cringed every time I threw organic waste in the garbage bag, to be hauled away to a landfill and left to rot anaerobically.  But in our cramped apartments and our frequent moves, I was never able to get around to setting up a decent worm composting system.  I knew that they really weren't very complex or space-consuming, but I just never found the time to sit down and organize some way of composting our organic waste.

Maybe seven months ago, a friend gave me some California redworms from her own compost trough, and this got me moving on my new project.  This friend and all the online explanations and commentaries I'd read had made me understand that worm composting was easy, odorless, and relatively hard to screw up.  This, combined with my typical callousness and aversion to following rules, made me set up a rather slapdash system for worm composting.  I simply made a pile of kitchen scraps, topped off by shredded newspaper, in the middle of a big planting pot we have in the patio of our newly-rehabbed house.  There was no container; the worms and the scraps just sat on top of the pot's soil. 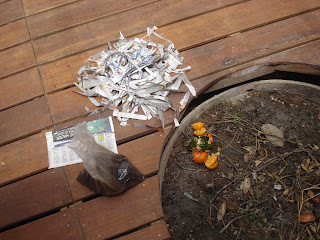 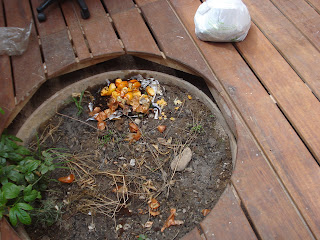 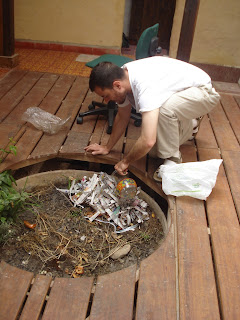 Eventually, worried about the worms' drying out in the sun, I began covering the pile with an upside-down plastic tub.  At this point, I don't believe fruit flies were much of a problem.  Over time the pile got bigger, so I eventually decided to contain it in a big plastic pot with holes in the bottom.  This too seemed to work fine, with the worms wriggling about happily whenever I checked to see how they were doing.  Fruit flies slowly started to present themselves, despite my best efforts to cover the pile with newspaper and the same upside-down tub.

Then tragedy hit.  One day I was checking out my worms, and they were doing great, and the next day there were none to be found.  I had somehow killed them all, these worms that were supposedly so easy to care for.  I had a really severe episode of self-doubt.  If I couldn't even keep some household worms alive, how could I pretend to be a decent agronomist and advise others on how to take care of the land and their animals?  Despondent, I took the worm pot up to our third-floor greenhouse and left it there, a vague hope remaining in my mind that some of the worm eggs I'd seen in my rummaging through the compost might actually hatch and repopulate the pile. 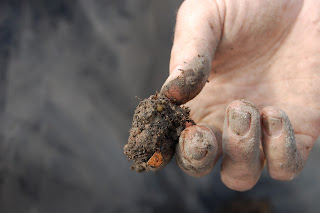 What had I done wrong?  I still don't know for sure.  In my careless, nature-will-take-care-of-itself attitude, I'd committed so many potential infractions.  I had loaded food directly onto the pile, instead of letting it pre-ferment for a while, as many websites suggested.  This was in part because it seemed silly to me to bacterially compost my kitchen scraps in order to prepare them for the worms.  If I was going to compost them that way, I'd just leave it at that and do away with the worms!  Anyway, as a result of my putting on fresh food scraps, the pile would sometimes heat up a bit as the food rotted.  Had I cooked the worms this way?

Maybe it was the pH of the pile.  I was adding lots of orange peels, and so maybe I was acidifying the worms out of their habitat.  On the other hand, something I didn't know was that the soil I occasionally added to the pile to provide grist for the worms' stomaches was extremely, toxicly basic.  One way or another, maybe the pH killed off the worms.

Or was the pile too wet, or too dry?  Was I adding too much new food for them to handle, or was I starving them with rare food additions?  Could it be that my constantly pestering them and rooting around in the compost to look at them had killed off the worms?

At any rate, amid my doubt and sadness, I gave up worm farming for a while.  In a few months, I opened the pot to see how it was, and I was thrilled to find a thriving worm community there!  By this time, I was pretty sure my mistake was either a very acid pH, or adding the food scraps too fresh.  So I resolved to transfer my worms to two new piles (the old one was thoroughly processed by then), both of which I would add wood ash to to neutralize the orange peels, and one of which I would add only food scraps that had rotted for some time.  This way I would avoid my pH problem, which I was confident of as a major factor in the die-off, and I would also test to see if I should pre-decompose scraps.

Both piles went well, and I gradually devised my current system of worm-keeping, in which I add fresh scraps to a bucket without any worms, while the worms process older scraps in another bucket.  When the fresh bucket fills up, the old bucket is pretty well processed, and I hand pick the worms out of the finished compost to throw them in the new bucket. 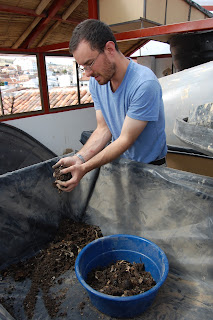 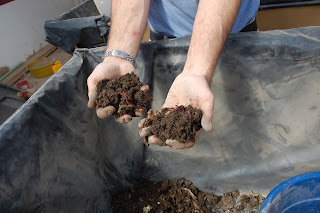 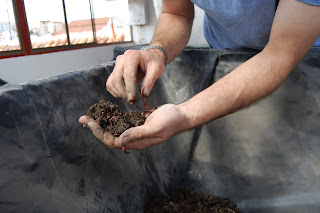 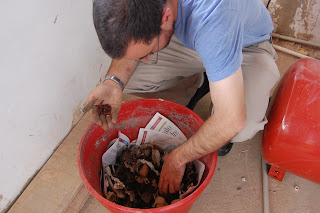 At this time I also pick old nails out of the finished compost; they come from the wooden fruit crates I often burn in our fireplace, which is the source of our citrus peel-neutralizing wood ash.

A problem I've had lately, again because of my thoughtlessness, is a fruit fly plague. They don't affect the black, almost-done worm compost, but they absolutely flock to and multiply in the fresh scrap bin, which I stupidly haven't been covering.  Fruit flies are the big problem people have to manage in a worm bin.  They aren't actually harmful to anyone or to the compost, but they're kind of gross and annoying when they swarm around every time you open the worm bin.  I have resorted to a new, multi-pronged strategy to control them.  First off, I freeze all food scraps overnight before throwing them on the pile.  This kills any eggs on the fruit peels.  Equally as important, I cover and totally seal the scrap pile whenever I'm not adding new stuff to it.  In my case, I do this with a healthy layer of newspaper atop every new scrap addition (this really doesn't effectively seal the pile, as the flies can crawl through the paper to get to the fruit scraps underneath), and more importantly, I not only cap the pile with an upturned tub, but I put a "caulk" of wood ash around where the tub meets the walls of my worm bin. 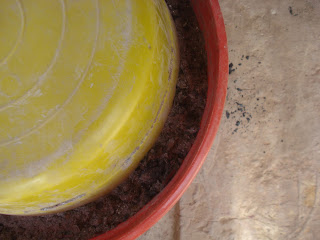 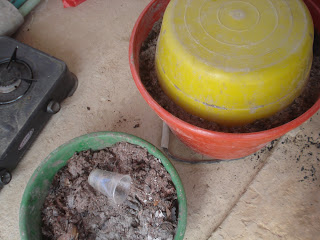 This way no flies can get in or out of the pile.  They would have to crawl through a desiccating, highly basic layer of wood ash to do so.  These measures seem to be preventing further fly multiplication, but I still have to get rid of the existing population.  I have hung up flypaper, and it quickly filled up with swarming flies, desperately seeking the food scraps they smelled but unable to enter the bin and feed there.  Also, as I have taken away their prime food source, some stray flies have wandered down to the kitchen, drawn by the smell of fruit there.  For the time being, I am keeping all fresh food in the fridge, even stuff like oranges and passionfruit that normally doesn't need it.  I hope that in the next week or two I will totally erradicate the fly populace, and then I won't need to be so drastic in hiding food and putting flypaper up everywhere.

So that's how I manage my worms.  It's far from a step-by-step guide for my readers, but I hope you have at least seen how, with little fuss but a fair amount of thought and observation, I have been able to install this worm system in my context, with the materials at hand.  I now throw away no food waste (not even bones or gristle), and my garbage pickup consists in little more than a shopping bag of plastic wrappers and packages every week or so.  Best of all, I have a ready, nutritive growing medium for anything I choose to plant. 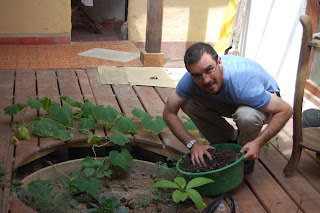 Posted by chicagron at 5:29 PM