Peace and peasants in Colombia

I feel that the tide of peace is rising in Colombia.  Recently there was a nationwide march for peace that brought in all social, economic, and political sectors.  Here are some photos of my town's schoolkids marching. 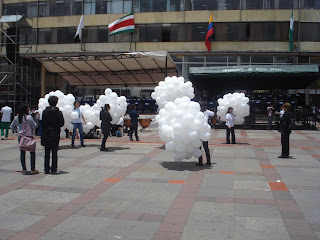 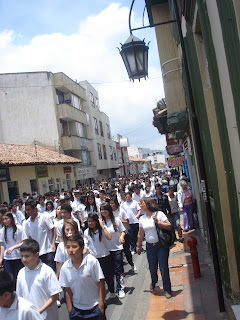 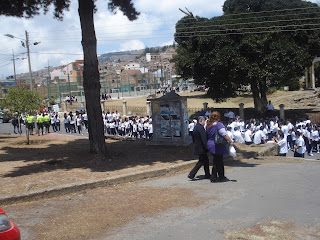 There was also a display to commemorate many of the people of Boyacá who've died in various ways related to the conflict. 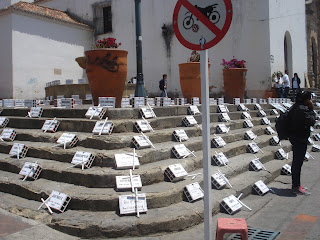 The peace talks between the government and the FARC continue apace in Cuba, and I've heard that the ELN, Colombia's other major remaining guerrilla group, also wants to participate.  Despite attempts by people like ex-president Uribe to derail a lasting peace, the Colombian society seems determined in their commitment to ending the war.  I am very hopeful about all of this.

Related to the issue of peace in Colombia, here is an article from the Economist about the legal framework that exists for creating peasant reserves in Colombia, and some of the difficulties and questions that such reserves raise.

Also more distantly related to the theme of running a society justly and well is that in the past few weeks the Colombian government has been talking about re-nationalizing healthcare.  As is, there is a public system for the poor, and everyone else is required to pay for insurance from a private provider.  These insurance companies then subcontract up the wazoo, such that between the person actually giving you a checkup and the person you pay, there are about a million intermediaries taking a cut.  Our particular health insurer isn't too bad, though we do often run into bureaucratic inefficiencies.  But regardless of how good or bad a given private company might be, I see no reason why public health should be entrusted to the private sector.  I welcome this change, and I feel that it is one more example of a common-sense, post-partisan logic taking effect in Colombian governance.  Normally private sector incursions into public services become a drawn-out, polemical issue of Right vs. Left, but that is silly--it's just common sense to have fewer middlemen between a government and its people in service sectors of primary need like health, roads, and food.

And I close with a short documentary about peasant agriculture in the Cauca region of southern Colombia.

Posted by chicagron at 9:35 AM