Health of the agroecosystem, the body, and the mind

A few weeks ago I had to go to Bogota for some administrative errands regarding my immigration status and a job opportunity. I went alone, as my wife had to stay in our hometown for some important meetings and other work.

The busride into Bogota takes one through the Savanna of Bogota, a flat area of drained wetlands perched high in the Eastern Andes. The region is home to a series of drab highway towns, plastic greenhouses for rose production, and wide expanses of grazing land on what used to be marshes. It's not very inspiring, though it is an important agricultural zone for Colombia.

At one point we had to stop for a military checkpoint. Babyfaced soldiers doing their two years of obligatory service came onto the bus and took everyone's ID to check them against their database of insurgents and terrorists. Anyway, the stop happened to be right next to a field where a few dairy cattle were grazing. They were accompanied by a few egrets and sparrows, hopping about and eating bugs out of the cows' shit and even right off the cows themselves. It was a lovely agroecological demonstration. The big ruminants eat the grass, and are accompanied by birds that keep the cows and the grass clean and healthy. You see the same thing in Africa, with birds perched atop grazing rhinos. So here in this manmade ecosystem, we have a mimicry or even a recreation of natural phenomena.

This was a fitting little revery for me, given that one of my reasons for this trip to Bogota was to attend a speech on agroecology at the National University, given by the famous agroecology guru Miguel Altieri. Altieri is a Chilean-born professor of agroecology at the University of California. I mentioned him in a (slightly critical) post I wrote last year. In general, I admire his insights, and though I somewhat lament his highly political rhetoric, I appreciate that someone like him is working in the otherwise conservative, ethically-compromised world of US agricultural universities.

However, his speech was somewhat disappointing. It's not that I already knew most of what he talked about--that's to be expected if I'm a specialist in agroecology and he's giving a presentation for a more general audience. No, it was his politicized, anti-US tone.

Agroecology can mean a number of different things. It can refer to a scientific field dedicated to studying the interactions and dynamics occurring within an agricultural ecosystem. In this sense you can study agroecology even on chemically-dependent, industrial farmland. Another meaning of agroecology describes a type of agriculture practiced in tune with ecological principles. Practitioners of this agroecology are sustainable or organic farmers that strive to minimize use of synthetic chemicals by reproducing natural dynamics on their farms. The last big definition of agroecology for me refers to the political promotion of this sustainable model of farming. That is to say that in this case agroecology can refer not to a farming system itself or a scientific field, but to an ideological movement.

Altieri's speech at the National University in Bogota that night was mainly of the ideological bent. He condemned the ills visited upon the world by corporate agribusiness, and articulated principles and models to combat or at least circumvent the industrial model of agriculture. I agreed with basically all of Altieri's precepts, but I had come to hear about the latest developments and ideas in the field of agroecology (as defined by my first two definitions), not a leftist political indoctrination. Furthermore, Altieri's tone was often one of populist pandering, targeting an external enemy to build a fleeting solidarity among an audience of diverse people. In this case, the external enemies were big corporations, the US, and the wealthy Northern countries in general. Again, all of the professor's arguments were sound. It is indeed the US and Europe that consume the world's resources at an unsustainable rate, it is indeed these countries that have caused today's climate crisis, it is indeed they who often proselytize and bully other countries to adopt socially and ecologically unsustainable models. It would have been entirely appropriate for a scientific conference to hone in on these realities and make prescriptions to fix them. But the hostile, polemical tone Altieri adopted was not at all fitting.

More than this, I was stricken by a real contradiction. If Altieri so despises the US and its way of life (which he has every right to do), why has he lived there most of his life? Indeed, I believe he's lived there longer than I have! I understand if in the 1980s, when his academic career really took off, he preferred to be in the academically-advanced US and not in the Pinochet cryptofascist backwater of his homeland, Chile. But today a major university in Chile or any other Latin American country could offer him the same prestige, the same academic platform, even the same salary, as in the US. So if the US is intolerably unsustainable and consumeristic, if Altieri's desire is for more solidarity with the Third World, why is he living in the US? It's an especially funny contradiction given my own status as a rather intolerant, conservative US citizen who has nevertheless decided to follow his conscience and live in solidarity with the people of the rural Third World. I would say that to be coherent, Altieri should either move back to help us here in the impoverished global South, or tone down his anti-North rhetoric a bit if he plans on staying and sitting pretty up there in California. Furthermore, it seems dishonest that in his English-language writing he adopt a milder tone so as not to offend his gringo colleagues, while in a Latin audience he's all sturm und drang, condemning and demonizing those same gringo colleagues.

I mentioned this to my wife that night. In her wonderful sincerity she asked me if I'd talked to Altieri about the contradiction. Of course I hadn't--that would be rude and confrontational. "Hey, if you're so damn radical and pro-Latin America, what are you doing in the US?" But I would like to have been able to ask him about it, in a non-threatening, respectful way. Who knows--maybe he desperately wants to return to Chile, but his wife is from the US and doesn't want to move. As one who's crossed borders for love, I'd certainly understand that!

Anyway, apart from the speech, that night we founded the SOCCA, the Colombian Scientific Society of Agroecology, a chapter of the pan-Latin American SOCLA. Again, I noticed a certain irony when all the candidates for the SOCCA presidency were from Bogota and its environs, while I, the gringo imperialist, was the only one in the crowd that actually lived in the impoverished rural provinces we were supposedly trying to improve. It's as if in Colombia we replicate marginalization and inequality even in our fora for progressive change. Either way, I'm excited about SOCCA. I think it can be a real tool for bringing agroecological research and advocacy to the mainstream in our country.

That weekend I went from contemplating the health of agriculture systems to lamenting the ill health of my own body and mind. We went to my family-in-law's farm a few hours from our town. It is located in the beautiful Rio Suarez region, known for its mild climate and sweets made from panela (unrefined cane molasses). I always enjoy going there, though I also feel pangs of melancholy, because I wish my wife and I could live there and start our own farm. This time though, I spent a miserable weekend at the farm.

I believe my riding the public bus and staying in our somewhat humid house in Bogota predisposed me to an attack from allergies or a cold or something. Since my wife and I got a car a year ago, I haven't ridden much on the public bus from our town to Bogota. It's a nice bus that I used to ride a fair amount. The problem is that it's got recycled air, like on a plane. I'd forgotten that I used to feel a bit sick for a day or two after I rode that bus, and perhaps since I'd fallen out of the habit, I was even more susceptible. Anyway, we went to the farm just a day after I got back from Bogota, so I spent that night and the next day in bed, agonizing. I hardly even got a chance to see the heifers I'd bought with my brother-in-law, 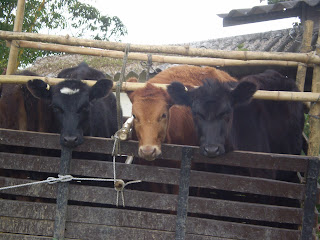 or the chicken pen he's set up, 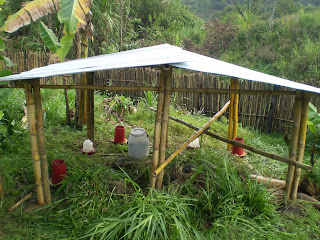 or the little blue-eyed puppy my wife and I were the proud long-distance owners of (we pay for his upkeep, but he stays on the farm so as not to upset my allergies at home). 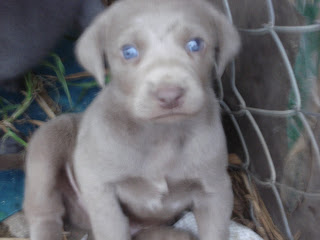 By the time we left the farm to return home, I was physically and mentally exhausted. I was pissed off at being sick, and pissed at myself for having gone along to the farm this time instead of following my gut instinct to stay home. But the car ride back home soothed me, body and soul.

We have a CD player in our car, and we have a CD my wife burned with songs from different English-language and Latin American artists. So to make me feel better, my wife put on Cat Stevens, one of our favorites. I was stricken by the diversity and range of his music. He uses gradations and variations in so many dimensions. In a given song he might rise from a whisper to a full-throated bellow, and he incorporates instruments from mandolins to harpsichords to Wurlitzer organs to his trademark acoustic guitar. The themes of the songs range from death to dreams to peace to father-son relationships, even the tangled emotional mess of "The first cut is the deepest", where Stevens sings of being torn between his present love and the memories of his first love. On "Father and Son" he sings the song in two registers, baritone and tenor, to differentiate a dad and his son singing their respective woes. In general Stevens takes advantage of so many dimensions of music--volume, register, tempo, lyrics, instrumentation. You don't see this in much pop music. Cat's music is like a well-defined agroecosystem, diverse and complex in many intertwined, complementary aspects that give it stability and resilience. Very different from my stepdaughter's punk music, which uses few notes, one (loud) volume range, the same instruments all the time, and dwells on the same sick subjects. Ibidem for much rap, country, or other popular music, which seem to shun complexity, like a monoculture field of chemical-dependent corn (Autotune would be the over-applied nitrogen fertilizer, in this analogy).

Then we also listened to the ingenious Joe Arroyo, one of Colombia's finest musical talents. His music is always unabashedly Afro-Caribbean, but he experiments with instruments, themes, and especially rythms, almost always slightly altering the clave beat that underlies most Caribbean fare. Arroyo even sings a song in a naive phonetic rendering of Wolof, in homage to a Senegalese salsa singer.

So by weekend's end, when we'd arrived home, I'd come to terms with agroecology's polemical mouthpiece Miguel Altieri, and I'd recovered my own physical health and even regained a certain peace of mind. As in a healthy agroecosystem, a blessed, balanced life isn't entirely free of setbacks, but it's able to bounce back from any imbalance, supported by the beautiful people, settings, and music that surround and sustain it.
Posted by chicagron at 4:07 PM