May Day and farm pictures

Today is May Day.  It is originally a pagan celebration of the coming of spring, but in the past 120 years or so has come to be a day to celebrate and honor the workers of the world.  In the US, our worker holiday is in September, and is called Labor Day.  This is despite (or because of) the fact that the May 1st workers' holiday has its origin in the United States, in fact in my city of origin, Chicago.  May 1st was the original date set in 1886 for workers to achieve an 8-hour workday.  After a series of strikes, there was a rally May 4th to protest police violence.  This worker meeting was held on the near West Side of Chicago, to be presided over by a number of German-born anarchists.  The meeting ended in tragedy when someone (perhaps an infiltrated provocateur) threw a homemade bomb at approaching police.  There followed a lot of gunfire, and then kangaroo court trials for 9 worker leaders, many of whom hadn't even been present at the rally.

I did a video report on the Haymarket riot, as the affair came to be called, for my 6th grade Chicago History Fair project.  Maybe someday I'll post the whole thing, in its embarassing pre-teen entirety, to this blog.

At any rate, today in Bogotá there will surely be lots of marches and such, especially as the day overlaps with the recently burgeoning student movement.  I'm no longer big on political marches--I think they're more the ambit of young people, who are big on visible, dramatic displays.  My time for that has past; I think my last march was against the Iraq war the day we invaded in 2003.  Expressing our indignation made us feel vindicated in our objections, but it didn't seem to do much to end the war (that would take some 8 years before the rest of the US public and its leaders figured out what my dumb, 20-year-old ass knew back in March of 2003).

So as my contribution to the workers' movement, I will offer the work I did this weekend.  My student aids and I spent most of Saturday and all of Sunday (well into the fortunately moonlit night) planting achira seed (actually rhizome pieces) in an experimental field in Guayatá, Colombia.  We sorted the seed, 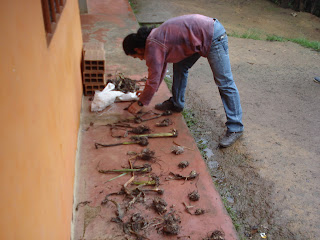 weighed a sample of seed from each variety, 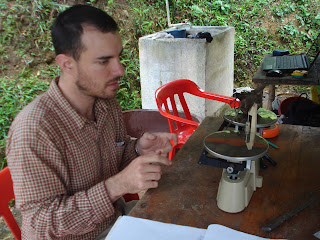 marked our field with stakes and string, 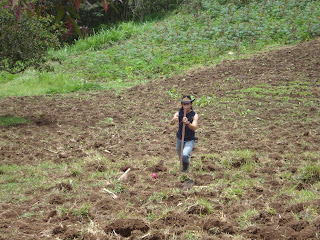 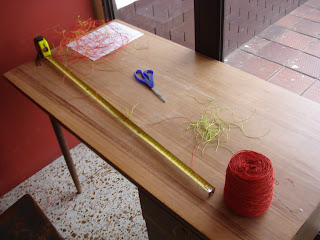 opened holes in the field (it had been roughly plowed by oxen a few weeks before), and planted each seed 90 cm apart with a bit of compost. 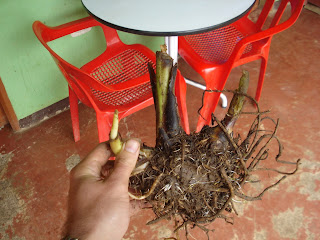 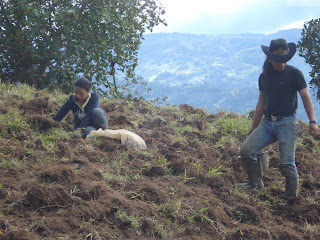 Here is a hole I opened, with black compost in the bottom, ready for planting.  Note the pink string that we used as a guide. 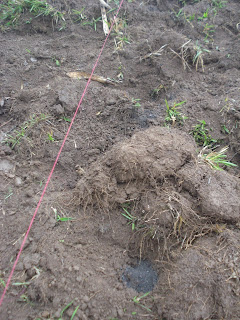 Here are the rows of posts at one end of the misty evening field, marking the rows of different varieties. 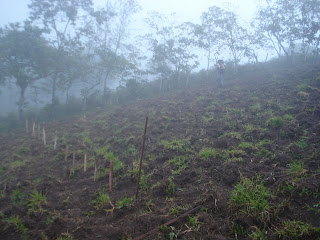 I didn't get any good photos of me working in the field, because I was the one taking pictures.  But I assure you that digging 500 holes in two days with a pickaxe is hard work! Here's me at the end of the second day. 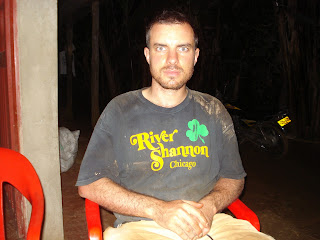 Here are some photos of the "bamboo" variety of achira, which has small, compound leaves very different from achira's normal banana-like foliage, and rhizomes that grow down into the ground instead of horizontally below the surface.  I'm convinced this may be a variety or even a new species hitherto unknown to science. 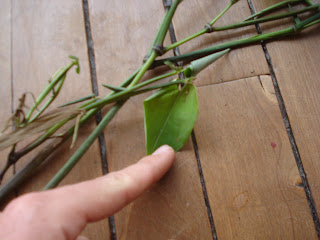 Note the wide variation in size and shape of the rhizomes. 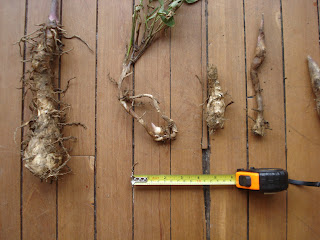 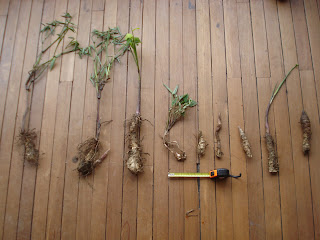 Here are some termite friends bustling about their mound, which is like an upturned iron sphere in the midst of the plowed field.  It's full of fertile organic matter from all the plants they've eaten and pooped out.


Here is a pretty flower common to rural Guayatá.  It yields a shallot-like bulb that I'm planning on trying to cook and eat sometime soon. 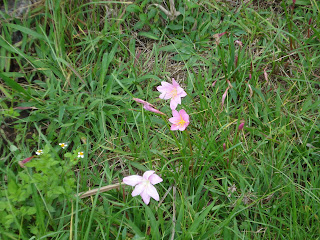 The field of achira we planted this weekend is part of our Huerta Muisca project.  We will be comparing the yield, nutritional content, and general agronomic performance of 4 different varieties of achira, a local root crop from which peasants extract starch for home use and commercial sale.  The hope is that by giving this serious scientific treatment to an otherwise-neglected crop, we can help small farmers to increase their yields and thus their income and subsistence consumption.  In time I'd also like to work on lowering their production and processing costs, which are what farmers cite as their main constraints in this particular crop.  Who knows if our project will actually help improve life for farmers, but that's the idea, and for this I consecrate my work this weekend to the workers of the world.

On a somewhat related note, my brother- and father-in-law are harvesting their first batch of corn silage, a new addition to their existing grass-based silage operations.  Here is a photo of the high corn ready to cut. 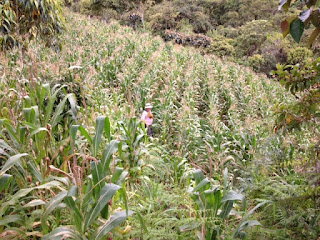