The other night I was watching "Raiders of the Lost Ark" with my wife and kid.  I've seen the movie about a million times, but I was in the mood for it, and my wife obliged me on this rare night we had time and energy to watch a movie.  Sam watched with us, one of the first times he'd actually sat down with us to watch a movie.

In the early scenes as Indy navigates a South American temple to steal a gold idol, my son got really excited every time Indy was onscreen. He started pointed and screaming and gesticulating, especially on the close-ups.  My wife and I decided that perhaps he thought the on-screen character was me.  Of course Harrison Ford was maybe ten years older than I am now when he shot the movie, and whatever my age, I'm no dashing movie star.  But it occurs to me that Sam has rarely seen any medium-complexioned young white guys from the US other than me, so maybe he sees light eyes and tanned skin and unkempt facial stubble and just assumes it's his old dad.  Throw in the fedora-like hat I usually wear outside, and my polyester farmer jacket (as compared to Indy's rugged leather jacket), and to a baby that sees me all the time, Harrison Ford might look pretty similar.

At any rate, this was just about the ultimate compliment to me.  I have admittedly aspired to live my life like Indiana Jones, complete with international adventures and an academic vocation that aims to understand how the ancient and modern worlds work (systems agronomy is basically like archeology applied to current, living social systems).  But I never consciously made an effort to look like him.

The movie was the first I've ever seen Sam actually watch.  He's been in the room at other times when the TV is on, but he usually isn't that interested.  With Raiders he was transfixed.  He even clapped and cheered when Indy's theme march came on as he was hijacking a Nazi truck.  This was not all to the good--I'd forgotten how violent the movie is, and frankly I don't want Sam seeing dozens of simulated deaths in the span of a mere two hours.  Furthermore, by the movie's end I noted that Sam was tired and wanted to sleep, but couldn't take his eyes off the screen to lie down.  There really is something addictive, primordial about the moving image, and I don't want Sam to get hooked as I long was. 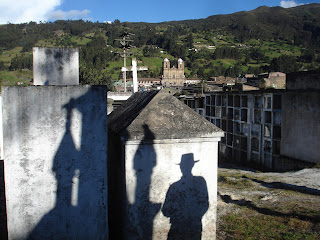 Posted by chicagron at 7:23 PM