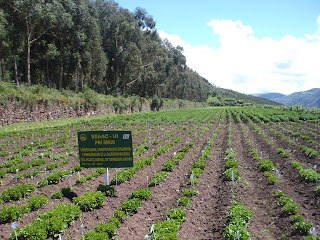 Here’s a brief description of the Andenes agricultural research station just outside of Cuzco.

Andenes is one of a series of agricultural experiment stations that the government maintains throughout Peru, in different climates representative of the country’s diversity.  At these stations one of the major tasks is the preservation of germplasm, which is to say the range of genetic diversity present in different crops.  Each station has a few crops it focuses on in terms of preserving germplasm, alongside duplicate seeds of other crops from other research station.  In the case of Andenes, their main crops are cubio, ibia, and ruba (known in Peru respectively as mashua, oca, and olluco).  The photo above shows the field germplasm collection; every year they plant out seed tubers of every variety they possess of these species, so as to multiply the seed.  There are also in vitro copies of many of the varieties, and when a variety’s seed tubers get bogged down by lots of viruses and disease and they stop multiplying so well in the field, that variety gets rotated through the in vitro laboratories so they can clean it of its problems.

Andenes research station receives its name from the pre-Hispanic stone terraces that comprise its fields.  In Peru they call such terraces “andenes”.  It is lovely to look at these ancient stone masterworks, complete with drainage and irrigation infrastructure, and then to think that they are still contributing to the country’s agricultural life. 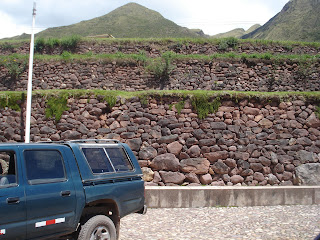 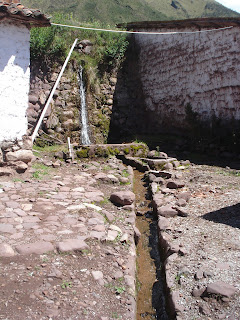 When I visited, there was a really cool experiment going on in which they were screening hundreds of wild potato species (dozens of times more than the seven or so cultivated potato species that exist in the world) for resistance to cold and heat and different diseases.  The eventual goal was to then forcibly interbreed these resistant wild species with existing traditional potato varieties, so as to maintain the charm and uniqueness of the cultivated variety, but endowed with resistance to changing disease and climate pressures.  Here are some photos of the wild species they were screening.  For those who know what a “normal” potato looks like, these will be a real surprise to see. 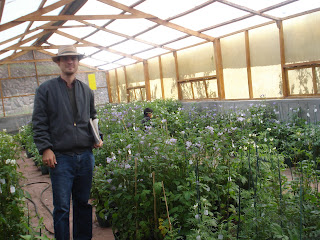 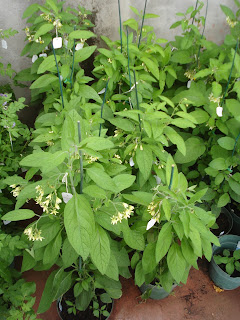 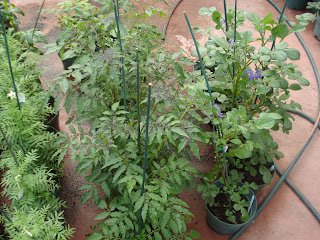 Here are some typical seed banks of things like quinoa and amaranth, which can be kept in storage for years and remain viable, unlike the fragile tuber crops, which can’t be stored for long without rotting or dying (hence the need to replant and multiply the cubios, ibias, and rubas every year). 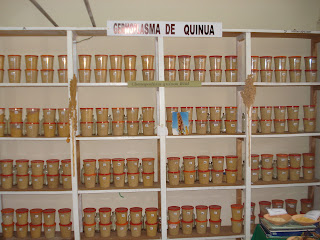 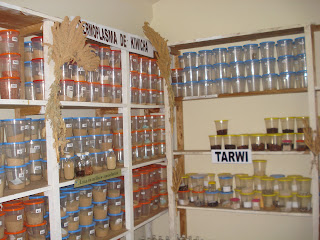 There was also a sort of visitors’ garden they had, with various different species planted for people to see in their beauty. 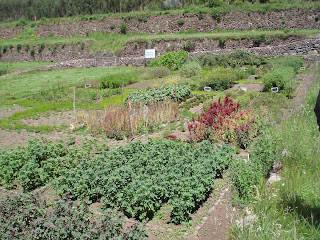 Here I am fondling a kiwicha plant there, a type of grain amaranth similar to quinoa. 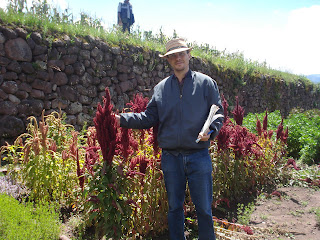 And not at Andenes but rather in the National University in Cuzco, I also caught a glimpse of a few of the genetic varieties of achira that they maintain in their field germplasm bank.  It's fitting to recall these now as I am wrapping up our project's own achira experiment. 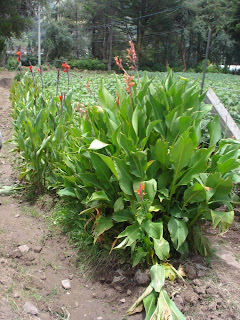 Posted by chicagron at 9:38 AM