Adventure in Peru 7: Cuzco is cold


Cuzco is cold.  I live in a highland town in Colombia at about 9000 feet altitude, and Colombians call this the “cold lands”, but it’s not really cold.  It’s in the high 60s Fahrenheit during the day, and maybe in the 50s at night.  On rare occasions, in the dead of January at like 4am, the temperature might get close to freezing.  But if you’ve got a well-designed house, the warmth of sunny daytime stays on into the night.  In short, my home in Colombia is not sweltering and tropical, but it’s not quite fair to say it’s cold.  Especially when compared to Chicago’s -15 F stretches most every winter, or these Scandinavian babies who sleep outside with no problem, highland Colombia is a very mild climate.  I have known people, myself among them, who have felt more cold in Bogota or in our town than in a Midwestern winter, simply because houses in Colombia usually don’t have heat.  But again, if your house is more or less cozy and enclosed, you won’t feel that cold.

Cuzco, on the other hand, seemed to me a biting, brutal cold.  At night it took me almost an hour under many layers of wool covers and a down comforter just to stop shivering violently.  And given the scarcity of oxygen in the city’s high altitude air, you’re left with the awful choice between putting your head under the covers, so you’re warm but feel like you are suffocating, or peeking out of the covers to breathe well yet freeze.  Consequently, I spent the first night in our hotel between fears of suffocation, delirious high-altitude dreams, trying to arrange myself so just my mouth was outside of the covers, and shivering.

Okay, so that’s the bad part.  After that first night or so, one arrives at a tenuous peace with the cold and the altitude (and the gastric issues brought about by a new cuisine), and though you never feel completely stabilized unless you’re there for longer than we were, you can enjoy the cultural wealth of Cuzco.  It reminded me a lot of my town in Colombia, just some 1500 feet higher, a bit drier, often warmer during the day, with a larger population, and with a better-maintained colonial and even pre-Hispanic architectural heritage.  There are slums on the hillsides. 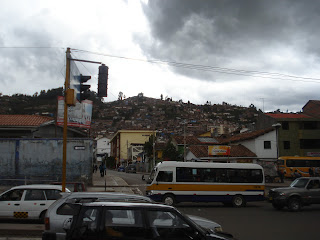 Charming little nooks and colonial details in the city center. 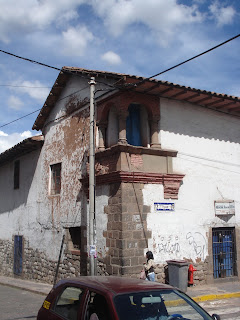 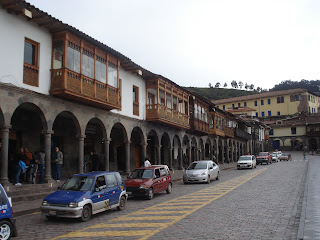 Ramshackle walls and old buildings that are falling down. 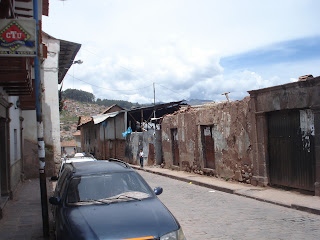 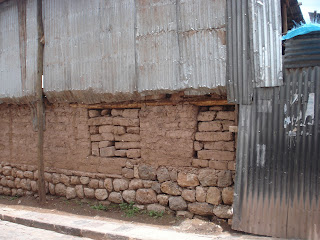 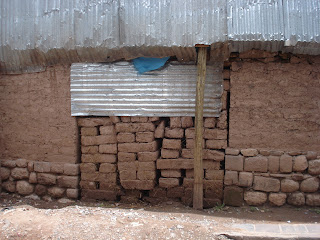 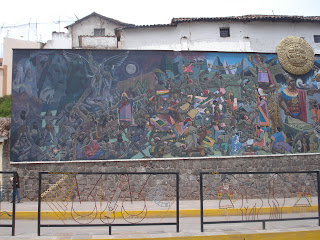 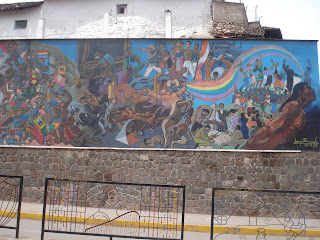 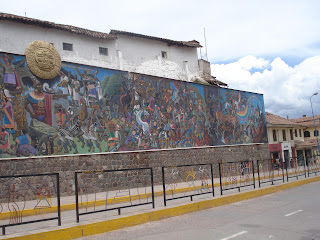 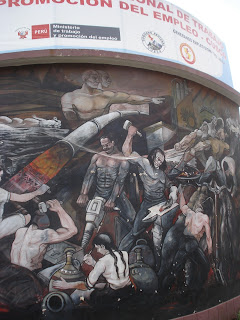 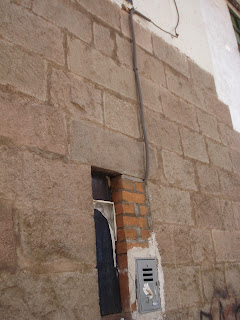 Magnificent churches built on Inca ritual and civic sites.  This is Santo Domingo monastery, I believe, built above the huge Inca gathering space of Qoricancha. 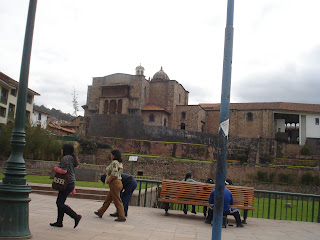 Here are the Inca-era foundations that line many central alleyways. 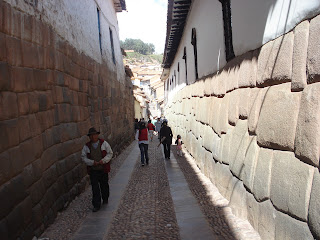 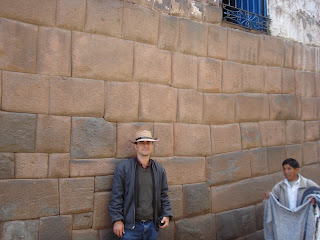 It seems their system relied on round, uncut stones at the very base, topped by precisely-chiseled squarish blocks on top.  I assume all this had some earthquake-related reasoning behind it. 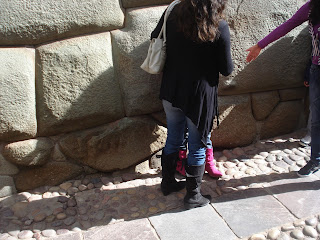 This is the famous 12(?)-sided stone that was cut to fit perfectly with surrounding stones.  The tourists passing by are an important 20th-century addition to the city’s architecture. 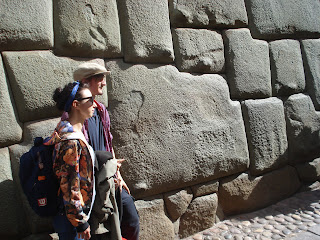 In other alleys of the center, you can see a more standardized stone-cutting and –joining process that I assume is post-Conquest, and then a much sloppier Spanish-style foundation that is light on stonecutting and heavy on use of mortar. 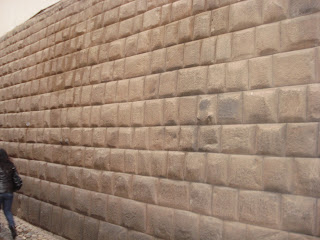 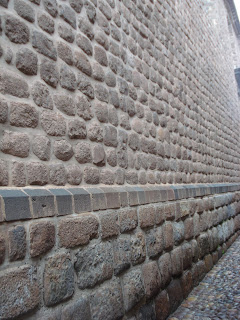 Here is the central patio of our charming hotel, the Qorichaska. 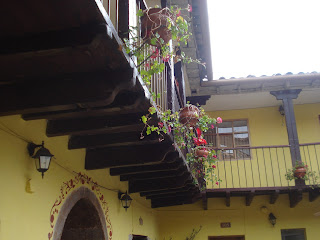 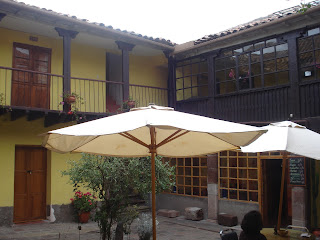 I don’t believe it’s an old construction, but it maintains a colonial style.  I imagine the city requires some such mimicry for new construction.  Here, for example, was a building in progress, that followed a roughly colonial look, and incorporated internal rain gutters—hence the break in the roofline just above the overhanging eaves. 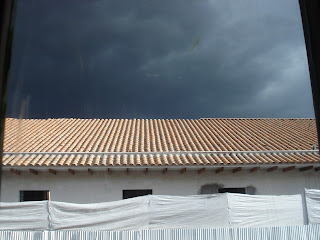 The first thing they do when you get to your hotel is to give you coca leaf tea, which should help with the headache and nausea and fatigue of the high altitude.  I had thought we wouldn’t have much difficulty with the altitude, living as we do in a high-altitude city of our own.  But apparently just those 300 or 500 extra meters really make a difference.  So as soon as we got in and had our tea, they told us to take a nap in our neatly-arranged rooms. 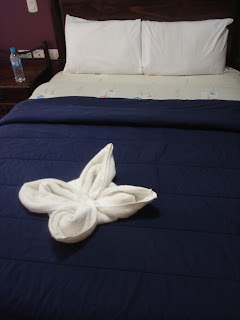 But best of all in Cuzco, after many days of sampling delicious Peruvian fare, was this rich, greasy, fresh-baked pizza.  I was thrilled to see it—you don’t get much good pizza in Colombia, unless you go to a really high-end place. 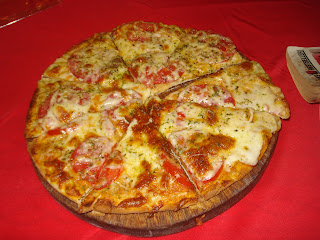 Posted by chicagron at 8:59 AM