As we draw closer to Lent for this year, I wanted to share some memories from last Easter.

I had just moved into our new house, but only the front two rooms were finished, and that's where I was staying.  Every night I would light a fire in the woodburning stove, read, and sometimes watch movies by myself.  It was a lonely existence, but for me a big step up from staying at my mother-in-law's house as I had for the prior 8 months.  I had of course been grateful to have had a place to stay, and she was always very gracious with me, but there's nothing like having your own place, even if it's dusty and unfinished.

In general I didn't make much effort to clean the house in those days, because it would quickly get dirty from the rehab work still going on in the back part.  But for Holy Week vacations, Caro and Sam were going to stay at the house for the first time long-term, so I wanted to get things in good shape.

We hired our friend and babysitter, Clemencia, to help us clean out the house over the first few days.  She brought her daughters to help, and they had a great time playing with Sammy.  Since then it's become a sort of a tradition.  If the house has gotten really dusty, we call Clemencia to come and clean on a Saturday when Caro and Sam are in town, and it becomes a work/play date.  This first time with Clemencia's daughters I also kept up with a role I have fallen into, of ambassador for US 1980s pop culture.  Since 2008 and even before, I have exposed my stepdaughter and a fair amount of other young Colombians (not to mention my wife) to films like Labyrinth, Parenthood, and the Breakfast Club, as well as classic books like Edward Gorey's Dwindling Party.  They really like them, even some pretty hard-core, rough punk kids from our gritty town.  That pre-Easter cleaning session we watched The Neverending Story with Clemencia's daughters, and they loved it, despite its being in English with English subtitles.  I see this cultural ambassadorship as a way of fostering goodwill towards the US, and sharing what I see as the best of our culture (there is even a whole cohort of Colombians I've left in my wake that are really into peanut butter now!).  All this said, last Easter Sam still wasn't talking much, and I wondered if despite all my efforts to instill US culture in those around me, my own son might never speak English!  Another fun aspect of that cleaning day was that we cooked arepas and other snacks right in and on our woodburning stove. 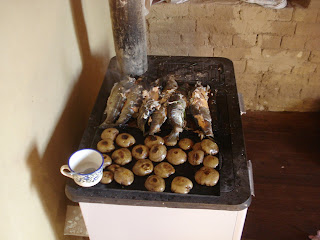 We made the most of our time in our small city, even though we spent most of the time working on the house.  For Holy Week here were plenty of somber, somewhat scary processions of barefoot, hooded "Nazarenes" carrying sacred images through the streets. 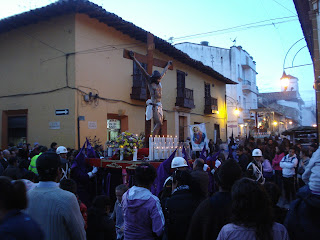 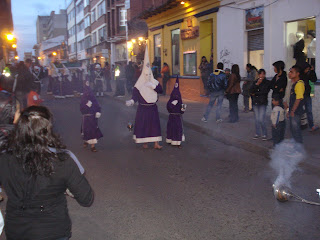 We also caught a lovely youth orchestra concert in a 17th-century Jesuit church, 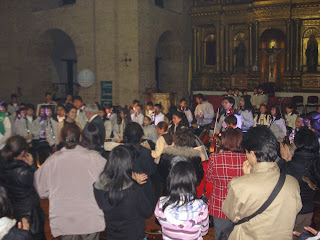 Here's their version of the Jesus Christ Superstar ouverture.


And imagine our surprise on the morning of Good Friday when we saw three crosses driven into the lawn of the park just outside of our window.  Eventually a big crowd came, and they strung up a live Christ and the two thieves.  It was really a spectacle. 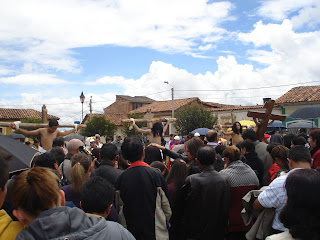 On Easter Sunday we went for Mass up to the colonial mountaintop church where we were married (and where Sam was baptized).  The Mass started really late, but Sam had a good time splashing around in and drinking from a filthy puddle while we waited.  I thought of the many Palm Sunday Masses we'd been to at the church, as well.  They always lead a big procession up from the slums of our city, with a real live Jesus on a real live donkey (that then spends the whole Mass eating grass on a nearby hillside).  The priest has a loudspeaker so he can walk along motivating the crowd, saying things like, "And now here comes Jesus on his donkey.  Let's give a big cheer for Jesus and his donkey!"  This year for Easter they'd even had a motorized incense blower mounted on a pickup truck.  Sam's last Easter he was a tiny little baby, fussing in my arms in a room of the humble house next to the church because I'd had to go change his diaper mid-Mass.  Now he was splashing in a puddle and clapping for the procession .  Maybe this year for Palm Sunday he can hop a quick ride on the donkey.  This is the kind of priceless stuff that makes me thrilled to raise my kid in Colombia. 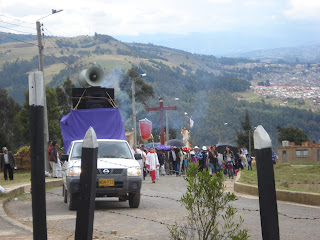 Posted by chicagron at 3:40 PM