Last year was the first Father's Day I shared with my family as a father.  I was already a father for Father's Day 2011, but I happened to be in Haiti for a month with my work, so I missed out on celebrating it with my family.  The best I got was a nice sermon at Mass in a middle-class parish in Vertieres, Haiti.

But for 2012 I was with my family, and it was a real treat.  I had been working a lot in the leadup to the holiday, and thus spending most of my weekdays away from the family.  In a few weeks I'd be off to Washington, DC for a job thing.  For someone who earns very little, I sure do give the illusion of busyness and bustle!

So anyway, I was in Bogota to spend Father's Day with my wife and kid, and also my stepdaughter, who also forms an important part of my family unit, even though our relationship doesn't always go so smoothly.  After so much adventure and bustle, the best gift I could hope for was the normal, laid-back weekend, doing things like a stable, middle-class family.  Don't get me wrong--both my wife and I enjoy and are grateful for fascinating jobs where we feel like we're doing something important.  But it's nice to have a breather once in a while.

Best of all was a hand-made present from Sam.  Two, actually.  First was a card he painted with some help from his teacher.  It was my first sweet school project made by my kid.  It made my heart melt. 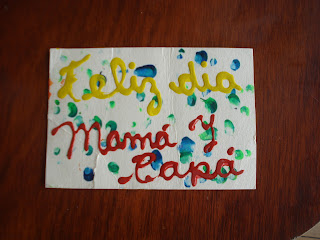 I look forward to the day when I have an office and a desk of my own, and I can post this kind of thing at my desk to remind me of my family in the midst of work.

Complementing this, and even more artistically impressive, were a pair of Momma and Daddy maracas he also made at school. 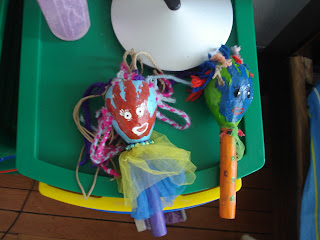 These were really cool, and they have accompanied him through lots of moments.  He always explains to us which is which, and likes to dress up his Momma rattle in different ways, organizing her skirts and necklace in different orders.

We closed out the weekend with a visit to an ice show that was in town.  This show occasionally sets up its tent in a vacant semi-rural lot on the outskirts of our small town, but this time the tent was in Bogota, in the shadow of a major stadium.  We went with my stepdaughter, Gabriela, who was wondering if they'd have animals (she's a big anti-circus person because of reports of animal abuse in these spectacles).

There were not animals (luckily for our family harmony), but there was a lot of local Colombian color added into my preconception of the circus experience.  There were guys hawking junky plastic light-up things, and our kid insisted that we get one, and it broke before the first act of the circus was over, all according to what I'm familiar with in the circus routine.  But aside from the show's being in a tent instead of the Chicago Stadium or the Rosemont Horizon, I was also amused that the guys hawking the junky things were semi-indigent freelancers milling about the parking lot.  A very Bogota touch, and frankly better in my eyes than further enriching whatever big company profits from the ice show.  As we waited in line to buy tickets, my stepdaughter and I also shared some street-grilled meat that was surely full of E. coli, just like back in my childhood visits to the circus.

The circus was billed as a Russian ice troupe, but I'm pretty sure they were all Mexican.  They really put on a great show though, Eastern European or not.  My son was transfixed like I'd never seen him before.  He's not used to TV, so I bet seeing a guy in a neon suit is a lot more impactful for him than for most kids.  There was juggling, clowns, people hanging from wires, in general excellent stagecraft.  Sam's favorite part was a 1950s homage, with everyone in poodle skirts and Archie Comics-looking getups.  They danced to Rock Around the Clock and a few other classics, and Sam was dancing along with them the whole time.  I was his partner.  I wondered if he had some inbred rhythm and taste for US rock music, or if my random singing to him over a year and a half had included enough 1950s stuff for him to really dig it.

We still have the photo some guy took of us in the middle of the show and then charged us $5US for.  Despite my anti-consumerist tirades and my family's general avoidance (whether for conviction or lack of time) of more typical middle-class pursuits, it's nice sometimes to depoliticize, unwind, and enjoy a sincere, uncritical moment with your family.
Posted by chicagron at 4:40 PM