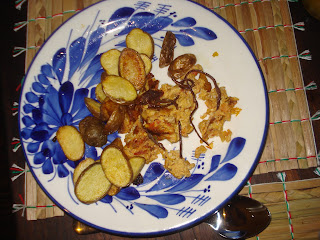 A little while back I posted about my raising worms in a compost bin.

Actually, I'm not so much raising worms as using worms to process my garbage.  My main focus is on reducing my household garbage production, not on being a good custodian of the annelid race.  Since switching to a composting system for all my organic waste (except for bones, which take too long to break down), I have drastically reduced the amount of garbage the municipal waste truck has to pick up from our house.  Right now for an average occupancy of maybe 3 people (2 during the week, and anywhere from 0 to 6 on weekends), we're generating one, maybe two normal-sized plastic shopping bags of garbage every week.  And these are not heavy, or even packed to the brim.  If you squash them down they take up maybe half the space of a full shopping bag.  If we were throwing away organic waste, we'd be dumping a shopping bag every night or two, and a heavy one, at that.  Of course I'm also generating high-quality compost for my plants, but since different types of manure are so easily available for purchase around here, that's not my main goal with the worm system.

(A side note--I recently read that that average US household consumes almost a thousand kWh per month of electricity.  Not to toot my own horn, but we're consuming like a tenth of that.  I don't know if it's because we turn off lights when we're not using them, or because we use low-consumption light bulbs, or we have a small fridge, or what.  None of these seem like they should be a major source of electricity savings, since we don't always turn off lights, not all of our bulbs are fluorescents, and our fridge is old and probably not too efficient.  Plus our water recycling system has us turning on pumps for a few minutes or even an hour every day.  Part of our savings must be because we don't have many electronics that stay plugged in all day.  No TV, no computer in one place, and we even unplug the modem and the stereo when we're not using them.  This relates to a larger trend--I think that we avoid some of the excess consumption that many US consumers don't or can't avoid, simply because in Colombia, or at least in our house, we are able to make choices that are difficult in the US.  I imagine it would be hard to even find a refrigerator as small as ours at most appliance stores in the States.  Ditto for the washing machine.  And often a US household has so many plug-in appliances like clocks and phones and TVs that it's not realistic to keep them all unplugged when not in use.  So once again, I feel lucky to be in a society in which, without being particularly conscientious, you can make ecologically responsible choices.  Often the de facto choice in small-town Colombia is low consumption, whereas in the States it's the other way around.)

Anyway, despite my main interest in the worms being their capacity to process my garbage, I was also curious about their potential as a food source for people or livestock.  With this in mind, this morning I cooked up a batch of worms.  A caveat:  this is not a common thing among people who do worm composting.  I don't want anyone to get the idea that composting is only for freaks that do things like eating worms.  It just happens that as an agronomist, I was curious about eating the worms.  Don't let my odd nature give a bad impression of composters in general, or discourage you from composting at home.  That said, if you are interested in eating worms, I'll tell you what I did.

First I picked some worms out of an active compost pile.  I tried to get about 20.  This didn't make a big dent in my worm population, nothing that would hinder timely garbage processing.  On the other hand, as I picked them out one by one, I realized just how many worms it would take to make a filling meal for a person or even a chicken.  For a portion of meat with your rice or bread, I'd wager you'd need at least 100 good-sized worms to feel like you'd eaten sometime.  And taking so many worms just a few times would quickly diminish my working worm stock.  This was just an experiment though, so I figured 20 would do.  Another thing I noted while picking out my worms is that unfinished worm compost really stinks.  Since it's basically undergoing a not-entirely-oxygenated decomposition process, the stuff smells like hot garbage.  It doesn't really emit a smell outside of the bin, but if you put your hands in it, they'll stink until you take a very hot, very thorough shower.

Once I got my worms out, I rinsed them in a colander to get off some of the slime and smell of the garbage, and then I put them in a little tupperware container with moist breadcrumbs that were left over from stale bread.  My son helped me by playing with the worms and keeping them company. 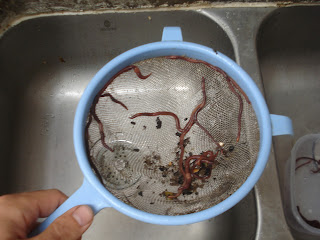 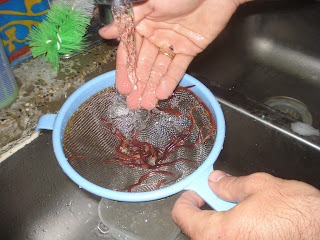 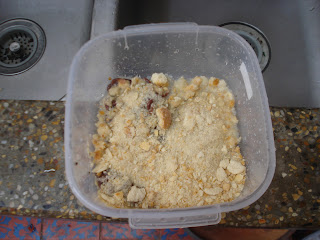 After a few hours, the bread medium was dotted with the worms' poop. 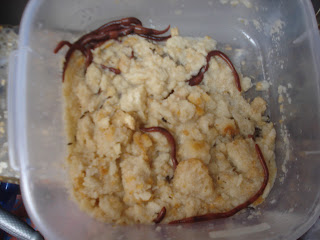 This was the whole point.  I didn't want to be eating stinky compost along with my worms, so I was purging them.  I could have just put them in the container with a bit of water so they'd fast, but I figured it was more humane to give them something to munch on, which would furthermore give them a nice internal breading, like inside-out fried chicken.  Anyway, I took out the worms from the bread, rinsed them a bit, and dumped out the poopy bread.  I did this two more times over the next day, until by the third and last bread change there was little or no poop present.

Then this morning it was showtime.  In addition to our fried potatoes, scrambled eggs, orange juice, and beef broth, my pupil Carlos and I were going to feast on worms.  Actually, feast is an exaggeration for portions of 9 worms apiece.  Nevertheless, we were looking forward to trying this exotic meal.  I heated up some olive oil and salt in a pan, and threw in my worms.  They rapidly sizzled and deflated, and when I scooped them out after perhaps less than a minute, they were crispy, like those fried thin noodles in Southeast Asian cuisine.  Carlos and I tried a few straight, and found them to have a mildly bitter, spinach-y flavor, with a broad, bready finish.  I was surprised at how good and flavorful they were.  I'd expected them to just take on the taste of the oil and salt. 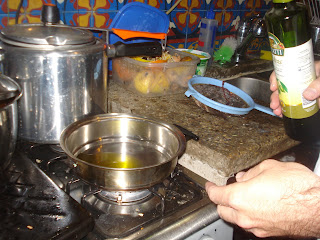 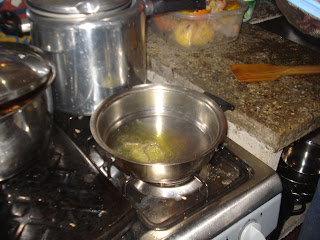 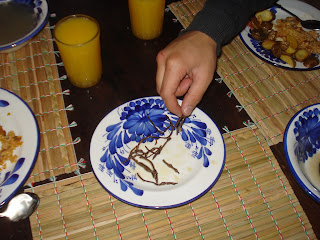 My conclusion is that California redworms are a decent eat.  They don't come in enough quantity to be a main course, and their bitter flavor makes them a better seasoning to complement and make more interesting your main event, as opposed to standing on their own.  If I were to start a cafe or fast-food place, I'd consider putting out a bowl of fried worms as a novel topping for your burger or something (to do this in any quantity I'd have to look for a larger-scale producer feeding large worm herds on copious amounts of manure).  All that said, I don't think I'll be eating them again any time soon.  I'm not grossed out by them--for some reason I don't have any problem with the idea of eating them.  It's just that they don't give much bang for the work involved, and above all, they're worth more to me working on my compost pile than sating my appetite.

At any rate, I wanted to share with my readers this silly little experiment.
Posted by chicagron at 3:03 PM